Sometimes it is still hard to think that Géra's Gift is almost ready for publication. I am just waiting for the cover design to be finished (I had some minor comments) and then it can be printed. Not just literally of course, as it will be an eBook too, but the butterflies are breeding in my stomach.

While I cannot wait, writing life goes on. Yesterday, I joined a few writer friends for a writing session at my favourite coffee shop. Now I know what John Scalzi wrote about notebooks and coffee shops (and the jury is still out on that one), but we had a great time. One friend wrote more than 3000 words, the other two were busy editing their manuscripts. I had to fix my computer first (need to check it before the next session) but still managed about 2200 words in the six hours.

We do take breaks, and chat and drink coffee, but the objective to write together seems to be working well. And the next session is hopefully going to be another great success. By that time I might claim to be published, and my friends might already be well on their way to saying the same thing.

This year has started on a very good note for the first Random House-Struik Writers Group of 2011.
at January 29, 2012 No comments: 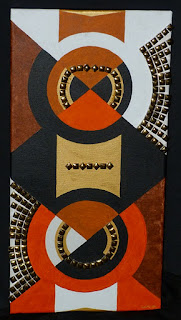 Finally, I managed to finish this painting. It went well until I made a mess of the last two blocks that had to be painted. It took some fiddling to remove the splotches that I caused, but then how to finish it?

It took some hard thinking, until inspiration struck about two weeks ago - why not use tiny gold metallic mosaic tiles to finish what I couldn't seem to get right with paint?

I wasn't sure it would work, but the guy at the craft shop assured me that the tiles could be glued on over the acrylic paint, and he was right. Some hours, and lots of patient tiling later, the result was better than I had originally imagined.

Now it needs the final layer of preserving varnish, and off to the framers we go.

And to think the design was inspired by a piece of discarded packaging material that I saw lying next to the road.
at January 15, 2012 No comments:

Email ThisBlogThis!Share to TwitterShare to FacebookShare to Pinterest
Labels: special 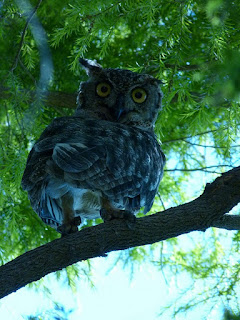 On Friday this nocturnal visitor found itself resting on the rooftop of my house and driving my dogs insane. A juvenile, judging by its size, Giant Eagle Owl made its way to my home in the middle of the day in scorching temperatures.
At over 30 deg C, this little visitor excited my dogs so much that I had to go and have a look at what was causing the commotion. Initially I thought it was injured, because it sat with one wing spread out over the hot roof. Then it moved around, and I realized that it was only trying to keep cool.
A few minutes later it made its way to this tree branch, giving me enough time to grab my camera and take a few pictures.
Of course, presenting me with its backside wasn't making it any easier. Until I realized that the tiny beeps the camera made when focusing, drew its attention. With its sensitive hearing, I managed to making it look at me without scaring it away, and the result, as seen here, is just one of many that I managed to capture.
The light was difficult because of the shadows of the tree and the sun almost directly in my line of vision. Changing the settings of the camera to ISO 200, shooting aperture priority, the details became clearer.
This photo was taken at approx 400mm zoom without a tripod, with a Lumix Panasonic FZ-40. The picture was not edited, only re-sized.

It has been a while since I did an art journal post, mostly because I couldn't decide on the topic. But once I did it was only a ma... 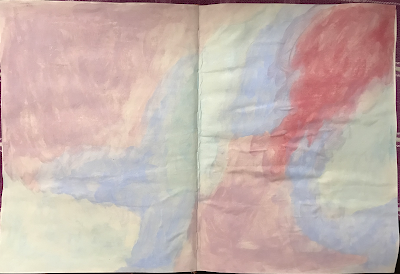