Book feature: ANYBODY WANT TO PLAY WAR by Tommy B. Smith 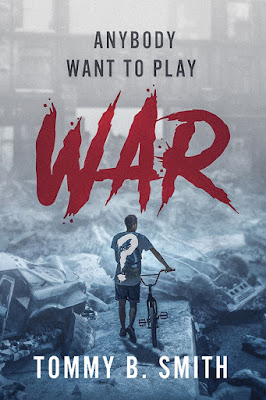 Anybody Want to Play WAR?
Brutal injuries can leave scars.
As the teenage survivor of a savage dog’s rampage, it’s a lesson Bryce Gallo will never forget.
Struggling to cope with his damaged appearance, along with a newfound fear of dogs and mounting anxieties at home and school, he flees his suburban home into the moonlit streets of St. Charles.
Along the roads of suburbia and through the shadowed heart of the city, he encounters Wheels, a maintenance worker for a series of apartment buildings; Paloma, known to some by the moniker of Lady Luck; and a woman in a dark house who is, as far as Bryce can fathom, like no one else he has met before.
His new life is not without obstacles or enemies, he learns. The future is a battlefield. Fire and smoke loom on the horizon, and his dangerous course may see the lives of his family and friends forever changed.


Excerpt
For several seconds, Bryce Gallo stared back at the dog until it shot toward him and lunged.
It drove him to the street on his back. With a flurry of spittle, its teeth latched into his face, digging in deep. The beast fought to rip the flesh away.
Bryce’s senses spun. He struggled for survival, pummeling the dog with his arms, pushing against the daze consuming him. Grinding its teeth in, the hound wrenched its head back.
Bryce’s flesh tore. He gasped. Blood, tears, and canine saliva leaked down his face.
It required a true effort of will to cram his hand into his right pocket, withdraw the pocketknife, and unfold its four-and-a-half inch stainless steel blade. Desperate, he stabbed it deep into the dog’s rage-quivering neck.
The dog reeled, grunted, and squealed. Its jaws slipped free. The canine staggered aside and darted across the street.
With a screech of brakes and a blasting horn, a white Cadillac struck the dog and smeared it across the street in a mess of red, white, and brown.
The hound’s death broke the fog of fear stalling everyone around. A woman screamed. Her boy stood transfixed.
A diminutive older man shouted, “Call an ambulance!”
Bryce pressed his hands against his bleeding face. It hurt, it burned, and that was his base assessment of the pain through his shock. Blood seeped between his fingers. He couldn’t restrain a choked cry. Wild dizziness consumed him.
The hard street, the blood, and the pain fell away in another instant, swallowed by minutes and hours of incomprehension. 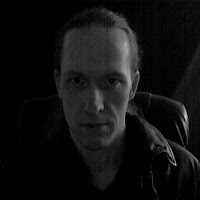 Tommy B. Smith is a writer of dark fiction, award-winning author of The Mourner's Cradle, Poisonous, the short story collection Pieces of Chaos, and the new coming of age novel, Anybody Want to Play WAR?
His presence currently infests Fort Smith, Arkansas, where he resides with his wife and cats.
More information can be found on his website at http://www.tommybsmith.com.

Posted by Linzé Brandon at 06:32 No comments:

Living the creative life...most of the time

Life has been crazy since my friend, Vanessa, challenged me to take part in Inktober this month. But my challenges did not end there. I also decided to follow a vegan diet in October (I follow a vegetarian diet since August 2018) and that has turned out to be quite the challenge indeed. But that is not all. Two large art projects have to be completed too - one at the end of November and one in December. November as you know is NaNoWriMo time, so I really have my work cut out for me on top of an increasing workload as a self-employed engineer.
As whiney as all that may sound to you, I am actually happier than I have been in a very long time. And the one thing I can attribute to that state of mind is control of my time. With more hours spent drawing than I have in a long time, I have also managed to work on a large cross-stitch project which I started in 2009. It is not finished yet, but I have more progress on that in six months than in the three years before.
While I do work longer hours than I ever did in a full-time job, I also now only work 4 days a week. And I am taking three days off in the coming week.
I am a long way away from earning the kind of income that I had before, but the freedom of my time totally makes up for that.
My drawing skills have improved although I am drawing a cartoon for Inktober which does not show the extent of my present skills. I still love the characters, Cricket and his friends, and am having a load of fun writing the little story to accompany each drawing. Maybe there is a cartoon series to contemplate with the (mis)adventures of Cricket and his friends, Tim and Cammy. Don't forget the dragon, Draco, who also has a few tricks hiding under those scales.
Inktober is running until the end of October and you can follow the adventures of Cricket and friends on Instagram.
The vegan diet will remain an option for me, but not permanently. Eating out in South Africa is for carnivores, with few vegetarian options and even fewer vegan options on the average restaurant menu. Cooking at home is not difficult, and that includes feeding my husband who is a committed carnivore. Snacking requires more planning than I anticipated, but my biggest challenge remains drinking coffee. With a dairy allergy, I drink my coffee black, but recently that has been a problem. So I have limited my black coffee drinking until after a meal.
I love having coffee while working (and not eating), so I have taken to "cheating" by drinking a pre-mix cappuccino powder twice a day. The powder does contain milk, but the processes it has gone through makes it palatable enough that two cups a day does not make me sick. I am not converting to a strict vegan diet despite some weight-loss (grateful for that) but can see myself be open to eating vegan more often in the future.
This time of year I think can get beyond the normal level of crazy we are used to, so I am making sure to get enough sleep, drink enough water, and focus on the things that work towards my mental well being too. And I trust that you will be mindful to do the same. We do after all only have one life, so we need to make the most of it, including taking personal time.
Until we meet again!
💜🙋‍♀️Linzé

Posted by Linzé Brandon at 16:46 No comments:

Keeper of the Dragon Sword